Weekes: A cricketer who became a legend helping groundsmen

Everton Weekes, whom I met in Barbados during the 2007 World Cup, has a tale of hardship with no money to buy a cricket ball or get coaching, but he learned the game by watching great cricketers. He became a master of ground shots due to lack of space to practice and earned the sobriquet ‘Butcher’ for his punishing batting style filled with  ground shots only. 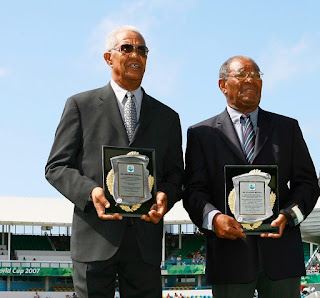 Today I feel privileged writing about the legendary West Indies cricketer Sir Everton Weekes who passed away at the age of 95 in Barbados on Wednesday, July 1, 2020. I was fortunate to meet this legend during the 2007 ICC Cricket World Cup when the organisers honoured Weekes and Gary Sobers by presenting them mementos before the start of the West Indies-Bangladesh match at the Kensington Oval.

During my days of playing cricket, I had read about Weekes as one of the three Ws of West Indies cricket, the other two being Sir Clyde Walcott and Sir Frank Worrell.  While reporting the 2007 World Cup, I was in Barbados for many matches and stories about the three W’s were good material for my daily diary.

It’s not always that one gets to meet a legend whose bust or statue finds a prominent place in any institution. Weekes' bust along with the other two W’s can be seen at the Cave Hill Campus of the University of West Indies in Barbados. Soon after meeting Sobers, who is also immortalized through his statue at Kensington Oval, I wrote a column titled ‘Rendezvous with a Legend’ for Gulf News from Barbados.  In that column, I mentioned Sobers who revealed on that day in Barbados that one of the reasons he had established as a consistent batsman was because of Weekes: “I used to ask Weekes about the different types of strokes. His advice was that I should always keep the ball on the ground so that it would be extremely difficult to get caught. And that is what I followed for a long time,” he'd recalled.

Sobers also mentioned that it was only after this long spell of consistency that he became an aggressive batsman. The legendary batsman will always be remembered as the first batsman to hit six sixes in one over. 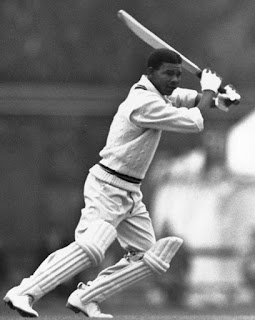 In his entire Test career, Weekes hit only two sixes. One was shot over the boundary while the other was scored running six full runs.  When Weekes was asked about this, he'd said that he had learned the game in a small yard near his house, and if he lost the ball hitting it high, he could not afford a new one. Since he had no money to buy new balls, the one he played with was knitted together with paper, cloth, and cork.

There are many tales about Weekes' exploits as a cricketer but what impressed me is how he overcame hardships in his life and became a legend, and was even compared to the great Don Bradman. In fact, Bradman had once stated that Weekes was the greatest batsman that West Indies had produced.

Weekes hailed from a poor family which forced his father to leave him at the age of eight to work on the oilfields. He never saw his father for 11 years.  Weekes never received any formal coaching but became a cricketer merely by watching top players in action. His desire to watch players made him assist the groundsmen at Kensington Oval and also turn up as a substitute fielder for a few teams.  As a reward for his work, Weekes used to get free entry to watch the great cricketers of that time in action.

As a boy, Weekes wanted to play for the popular Pickwicks team, but since that club picked only fair-skinned players he played for the Westshire Cricket Club in the Barbados league. Weekes grew up hating racism, and once in 1960, he along with Rohan Kanhai almost walked out of a cricket tour of Rhodesia while playing for the International Cavaliers team as the match against Bulawayo was shifted to a substandard ground since the original venue for the match was located in a white-dominated area.

In 1948-49, Weekes toured India immediately after hitting a 141 against England in the Kingston Test match. He then hit 128 against India in Delhi, 194 in Bombay and then scored 162 and 101 in both innings of the Calcutta Test. As a result of this feat,  he became the first batsman in Test cricket history to score five centuries in consecutive innings, a record that remains unbroken till today.

For a man who learned cricket only by watching, with no formal coaching, a batting average of 58.61 in Test matches and 55.34 in first-class cricket is indeed remarkable. Weekes was nicknamed 'Butcher' for his punishing batting style.

He once explained his run making habit to the late commentator and writer Tony Cozier: “Making runs is a habit. Why not enjoy it when you get into that habit, for there will come a time, once you play long enough, that you'll lose that habit.”