Pakistan cricketer Hafeez has the rapid cure from coronavirus

It is one of those days again when my friend who is ignorant about cricket called me to ask a question, and as usual, left me stumped! He calls me often because he thinks that as a journalist I should know everything about what is written in the newspapers. Very often he gives me the feeling that I am responsible for all that we see published there. He claims to have been reading my cricket reports though he barely knows anything about the game and has never watched one from a stadium.

However, after every big tournament, he would call me and complain that I did not offer him a complimentary ticket. One main reason for not offering him a ticket is that even without watching cricket he has numerous doubts after reading my reports. So one can well imagine what would be my state if he actually watched a match!. Then there could be a situation where he actually walks up to a stranger at the stadium and pose the same awkward questions to him.

Coming back to his question to me this time: “Why haven’t you written about Pakistan's Mohammed Hafeez getting rid of the coronavirus in just less than 24 hours? Looks like you have missed such a big story." Before I could think of a response, he added: “You see, the Pakistan Cricket Board recently reported that their cricketer Mohammad Hafeez had tested positive for coronavirus. But Hafeez showed them how one can recover within hours and turn negative from a positive state. All he did was go to a private clinic, test himself there, and publish that he was negative.” 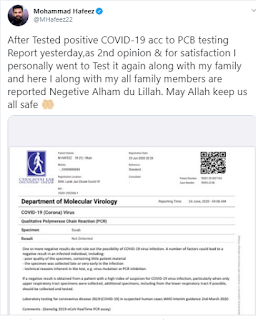 Mohammed Hafeez tweets he is  negative

Continuing to speak about Hafeez's magical recovery, he said, “Do you have proof of anyone other than Hafeez getting cured of coronavirus in less than 24 hours? Only Hafeez has proved that. So instead of flying him to England to play cricket, scientists who are researching for a cure for this deadly virus should study him in detail. Maybe he has something in him that can get rid of the virus so quickly. Don’t you know that once you are tested positive you need to go into quarantine for at least seven or 14 days depending on how serious it is in that country? This is to ensure that the infected person does not spread it to others. But Hafeez has shown he can get cured in one day and is already on the flight to England for the matches!”

It looks like he realised that I had barely said anything and that I would not be able to give him a convincing response. So he said" “Please call Hafeez and ask him. I know that you have reported many of his matches...so you can do it. We would all like to know his secret for this magical cure. Please don’t think I am speaking like the TV anchor Arnab Goswami who often says "the nation wants to know". Honestly, the whole world wants to know from Hafeez now.”

I wanted to let him know that I would get back to him after speaking with Hafeez, and then hang up, but pat came another question. “In your reports, I often see you mention that a batsman hit a catch straight down the fielder’s throat. Will this be possible during this series against England since most players will have their mouths covered with a mask, isn’t it?”

I had a befitting response to his question, but he went on. “Six Pakistan players who had tested positive for coronavirus just a week ago are all in the team. Now I think all the England players must be really worried even before the start of the series and would be wearing at least two-three masks when they play Pakistan.”

My friend refused to end his conversation. “Imagine the state of the umpire when Hafeez bowls very close to him. To me, his situation seems very much like the line from William Shakespeare’s 'Hamlet' which says "To be or not to be".